A crankshaft sensor is one of the extremely important components for the proper functioning of automotive parts. Crank sensors boost fuel economy and help you drive smoothly by accurately measuring the position and speed of the crankshaft. The crankshaft sensor works for a very long time, but it does not last forever.

It might be dangerous to use a car with a faulty crank sensor. A faulty crankshaft sensor cannot provide exact data about the rotational speed and position of the crankshaft. Therefore, it is mandatory to use your car correctly to keep the sensor working efficiently for longer durations. If you’re wondering what causes crankshaft sensors to fail, here are 5 common signs that may be the cause. Keep reading to find out more. In this amazing guide, we will discuss the five reasons which cause the crank sensor to go bad.

What Does the Crankshaft Position Sensor Do

Specifically, the CKP sensor generates a signal that is used by the Engine Control Module (ECM) as an input to determine ignition timing and injector pulse. The sensor also helps to identify when the engine is running and assists with diagnosing any misfires that may occur within the engine.

Sometimes, a defective crankshaft or old crank causes the crankshaft position sensor to fail, but most of the time, it’s the way we are using our car that affects its lifetime. The crankshafts do not go down immediately. It shows several indications before stops working altogether.

These indications appear so that we can get it fixed there and then. The first sign is that the check engine light starts blinking, showing an issue with the engine’s internal part. Locate if the crank sensor isn’t working and resolve it at once.

Engine overheating causes damage to the crankshaft sensor to go bad. Even though the engine is supposed to be heated and is designed to tolerate the heat that is being produced in it.

But at times, the engine becomes overheated due to several reasons. This excessive heat in the engine can affect the crankshaft sensor or break it completely which deteriorates its efficiency.

Sometimes, the sensor fails to bear the heat and sensors eventually fail due to excessive heat on any side of the engine. Taking measures to produce less heat in the engine will contribute to the longer life of the sensor.

If you compromise the crank sensor issue it can result in the disconnection of the wires. After the disconnection, the signals would no longer be transferred to ECU, and hence, you need your sensor replaced by a certified mechanic.

Stuck metal debris also causes the crankshaft sensor to go bad. Due to increased vibrations, other parts of the engine also get damaged. These damages will create metal debris that keeps revolving in the empty spaces in the engine.

A faulty or shorted return circuit also causes the crankshaft position sensor to go bad. As circuits play an essential role in transmitting the signals from the sensor to the engine, the circuits must be safe and healthy.

Faulty circuits can never transfer the signals correctly, and the crank sensor’s primary purpose will not be fulfilled. The condition of the sensor gradually drops, and you will end up with a malfunctioned sensor.

Sometimes, loose connections between the crankshaft and sensor out-turn into a dangerous situation as it causes the crank sensor to disconnect from the system.

Why do crankshaft sensors fail?

There are a few reasons why crankshaft sensors may fail. The sensor can cause a problem if the temperature is high. The Crankshaft position sensor symptoms of failure also include contamination from oil, grease, or other fluids. Moreover, physical damage can cause the plastic casing of the crank sensor to be damaged which wears down the crank sensor or breaks one side of the sensor. Finally, the crankshaft sensor can simply wear out over time and need to be replaced

What damages the crank sensor?

The crank sensor is responsible for monitoring the position and rotation of the crankshaft. It relays this information to the engine control unit, which uses it to control the fuel injection and ignition timing. The crank sensor does not directly control the fuel pump, but it is indirectly involved in the fuel injection process, which is necessary for the engine to run properly.

Does a broken timing belt affect the working of the crank sensor?

Your engine may not start due to a broken timing belt but sensors. If the timing belt breaks or slips, it can cause the crankshaft sensor to read incorrect information, resulting in engine performance issues or even causing the engine to stall.

Can a bad crankshaft sensor ruin an engine?

A bad crankshaft sensor can cause issues with engine performance and starting, but it typically will not ruin the entire engine. The sensor can still function to some degree, even if it is failing, but as it continues to malfunction, it can lead to misfires and potentially damage to other engine components. If the crankshaft position sensor fails completely, it can prevent the engine from starting. 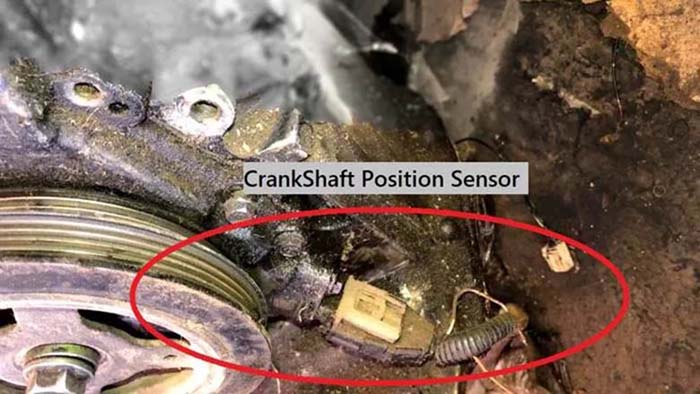