Do you know what the start system mean?

A car start system is a system, which starts your car’s engine and enables you to travel.

On this powerful page, you are going to learn the car starting system diagram, components, functions, and working explained in easy-to-understand language.

The car starting system is a crucial system of the car. It is based on converting the chemical energy stored in the battery into electrical and then into mechanical energy in the starter motor.

The starter motor’s job is to start the engine. An internal combustion engine cannot start itself, it must be cranked at some speed (about 50-100 RPM for a gasoline engine) for a couple of firing stokes until the engine runs on its power.

The starter is a large electric current consumer and runs very fast, if it is not turned on and off on time, it can damage and discharge the battery. A system is used to operate the starter motor properly on time to prevent the starter from damage and gets saved the battery power, called starting system, whose job is to start the car with the greatest possible efficiency.

The latest model cars have starting system based on an integrated control method by the electronic control unit (ECU). The ECU-based starting system has the potential to be used for real-time condition monitoring and fault diagnosis of vehicles.

How Does A Car Starting System Work:

Furthermore, the starting system consumes a lot of current from the battery to energize the starter motor. This is the reason; the starter circuit requires a large diameter cable to carry the current.

Here I want to talk a little about starter safety switch variation. The automatic and manual transmissions use two different types of safety switches placed in different locations. In a manual transmission, the safety switch is located at the clutch pedal end and its contacts are open, will only be closed when the driver presses the clutch pedal. When the pedal is pressed, the current starts to flow to the starter relay, as a result, the relay is activated.

On the other hand, in an automatic transmission, the park/neutral safety switch is located under the gear shift lever or at the gearbox case. In an automatic transmission, the Engine Control Unit (ECU) sends an earth signal to the relay to energize it. The ECU will only allow an earth signal to the starter relay when it detects the safety switch in the park or in neutral.

The Engine Control Unit (ECU) takes input from the cam or crankshaft position sensor and some other sensors and calculates them together, through which the ECU decides to send an earth signal to the starter relay and fuel pump relay. So, when the starter relay is activated, a large amount of current goes from the battery to the starter solenoid.

The starter motor assembly consists of many parts such as armature, commutator, brushes, pinion gear, overrunning clutch, and planetary gear set. The commutator takes the current from the brush and sends it to the armature. Where the magnetism is created and as a result, the starter motor turns.

The planetary gear set is used to increase its torque to overcome the resistance of the piston up-down movement. As the armature starts to rotate, meanwhile the pinion gear is pushed forward by the solenoid to mesh with the engine flywheel. Thus, the engine is cranked and gets started.

As you can see, the starting system is complex; it is the combination of two circuits and many components. I hope you would have understood. I tried my best to help you understand in an easy language.

Below is a comprehensive explanation of starting system components and their functions.

The battery is also known as a Power Bank is starting system component. A car battery is an electrochemical device that stores the current in chemical form and converts it into electrical current when needed. The battery is the heart of the cars’ electrical system and is usually placed in the engine compartment.

There are many types of car batteries, but the most common type is the lead-acid battery. It is named a lead-acid battery because it contains lead (Pb) plates inside the battery submerged into the sulfuric acid (H2SO4).

The liquid inside the battery is called the electrolyte, which is a mixture of sulfuric acid (H2SO4) and water (H2O). Indeed, a fully charged lead-acid battery consists of 40 percent sulfuric acid and 60 percent water. The lead plate and electrolyte create a chemical reaction, which releases energy and gives us the electric voltage and current.

Here you should remember one crucial point that a car battery does not store electric current directly. It stores the energy in the chemical form and converts that chemical energy into electrical energy (Electric Current) when needed.

But it is not a deep cycle rechargeable battery that means the battery should not be discharged more than 70 percent, which is harmful to the health of the battery and can reduce its lifespan. And it should be noted, when the electric current is supplied to the battery, its chemical reaction is reversed, and we call it that the battery is recharging.

It is because, in a cold climate, the chemical reaction in the battery slows down, which reduces the battery strength and minimizes the ability to produce maximum current.

That is why a good battery is considered the one, which cranks the engine for 30 seconds at 0 F temperature while still maintaining the voltage equal to or higher than 1.20 volts per cell or 7.2 volts for the whole battery.

Functions Of The Battery

Below are the five positions of the ignition switch.

Lock Position: This is the position when the key is inserted but not yet turned. In the lock position, all the electrical circuits are off (no current flow) and the steering wheel is locked. Some cars have the lock and off positions built-in together in the same position. The key can only be extracted when it is in the lock position.

Off Position: It is the default position, in the Off position, all the electrical circuits are “off” (no current is supplied), and the steering wheel is free to turn, but the key cannot be extracted.

Run/ON Position: This is the position in which the key remains, once the engine has started. In the Run/ON position, all the electrical systems are activated except starting system. The current is supplied to all the components including, fuel pump, fuel injectors, various sensors, ABS motors, SRS airbag, dash lights, and many other components, except starting system’s circuit.

Conversely, the vehicles equipped with a Push/Start button may combine the accessory and Run/ON position with the first push of the button.

Start Position: This is the last position of the key rotary ignition switch. It is a spring-loaded returnable position, which returns to the Run/ON position when the key is released. In this position, the current is supplied to only the starting and ignition system, and the current is cut off from all the accessories.

That’s why the radio, windows, and other accessories stop working while the engine is being started. It is because to ensure the maximum cranking capacity of the battery.

Function Of The Ignition Switch

Below is the starter relay wiring diagram.

Function Of The Starter Relay

The purpose of the starter Safety Switch is to not allow the car to start in gear as it would cause the car to jerk forward or backward accidentally. The Starting circuit will only be completed, when the automatic transmission is in the Park or Neutral position, or if the car has a manual transmission when the clutch pedal is depressed.

The Park Neutral Position Switch is a safety switch that prevents the starting system from operating when the automatic transmission is in any gear other than park or neutral. The park neutral position switch gives the information to the Engine Control Unit (ECU) about gear positions, in which gear the transmission is in.

When the ECU detects that the gear is in the park or Neutral position, then the ECU sends an “Earth signal” to the starter Relay terminal 85 and the Relay is energized. If the ECU does not detect the gear in Park or Neutral position, then it will- not energize the starter relay. The park neutral switch is located either below the gear shift lever or beside the gearbox or some cars have inside the transmission case.

A Park Neutral Position Switch is of two types.

In mechanical shift transmission, a cable or linkage is used to connect the gear shift lever to the park neutral switch at the gearbox.

In the “Shift by Wire” shift transmission, the transmission position changes through electronic control, without any mechanical linkage between the gear shift lever and gearbox. This shifting can be operated by a lever, touch screen, or joystick.

Function Of The Starter Safety Switch

The function of the starter safety switch is to prevent the car from an accidental start-up with the car in the gear or clutch not depressed, as it can damage the transmission by jerking forward or backward.

A starter consists of a solenoid and a motor assembly. A solenoid is an electromagnetic switch that engages and disengages the battery to the starter motor assembly. It also functions as a bigger relay, which works on the principle of using a small current to turn on a bigger current.

The starter motor assembly consists of many parts such as armature, commutator, brush, pinion gear, overrunning clutch, etc. All parts get combined and have a working starts motor assembly.

Working Operation Of The Starter Motor:

Function Of The Starter Motor

The function of the starter motor is to create torque to rotate the engine flywheel and gets the car cranked.

On the other hand, the second circuit is a heavy starter circuit; it is a positive cable of large diameter, multi-stranded, used for providing a large amount of current from the battery positive terminal to the starter motor.

It is recommended to replace the cables when it is corroded as it can give problems in starting the car. Usually, a battery cable will last anywhere from 50,000 to 100,000 miles. 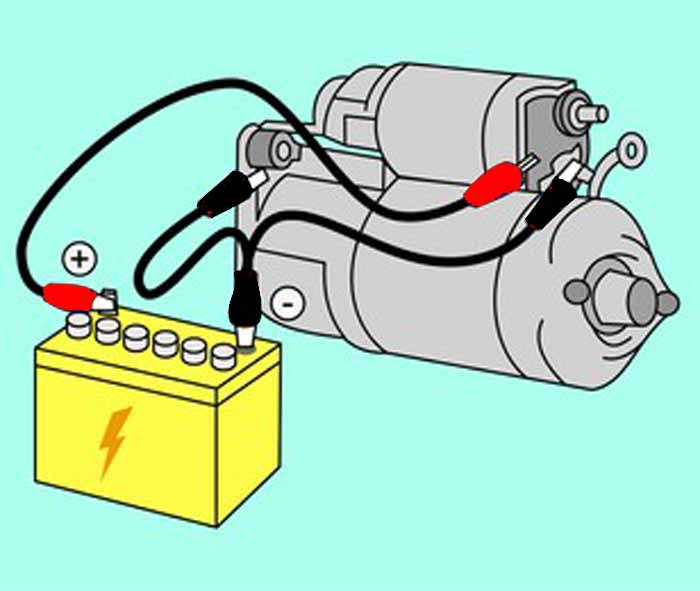